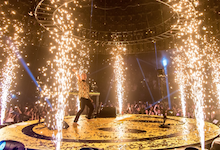 Fatboy Slim recently launched his hugely immersive “In the Round Show Tour”, where he scheduled to play 6 cities throughout the UK! Fatboy Slim’s aim was to create the biggest dance floors turning our favourite arenas into unique nightclub experiences full of rave ushers & a live smiley face experience.  It’s been 20 years since ‘You’ve Come A Long Way’, 17 years in fact, since he played the infamous Big Beach Brighton. The man behind the alias, Norman Cook, rose to prominence as part of The House-martins in the 1980s before, forming Beat International, finally adopting the name “Fatboy Slim” for his solo work. His debut album, ‘Better Living Through Chemistry’, was released in 1996 and was followed rapidly by 1998's ‘You've Come A Long Way Baby’, which included the major smash hits 'The Rockefeller Skank', 'Praise You', 'Gangster Tripping' and 'Right Here, Right Now'. Slim, is well known for being at the centre of spectacular live shows, innovative music videos and huge report-to-the-dance floor tunes. As a solo act, Cook has won 10 MTV Video Music Awards & Brit Awards throughout his career to date!

Fatboy Slim’s 2019 ‘AT THE ROUNDHOUSE’ UK tour, kicked off in London on Thursday 21st Feb, at the SSE Arena in Wembley, and followed subsequently at Birmingham, Cardiff, Glasgow and Manchester before he concluded his final arena stops on the 1st March, at Motorpoint Arena in Nottingham & finishing up in Dublin.

Lighting Designer, Stephen Abbiss (who has worked alongside Fatboy Slim for nearly a decade) alongside Proper Productions, was keen to ensure the video on stage during the performances, became a prominent feature within the design. Since Norman mixed completely live on stage, the success of the show’s visual element relied on clear, direct communication between Steve and the tour’s digital content creator and video operator Bob Jaroc, which needed a lot of preparation in terms of knowing exactly which tracks Norman was going to play. A Robocam was used on stage next to the DJ set up, to allow a live feed of the upcoming tracks, so that the right video content could be shown on screen.

So what was provided to bring the rave to life? 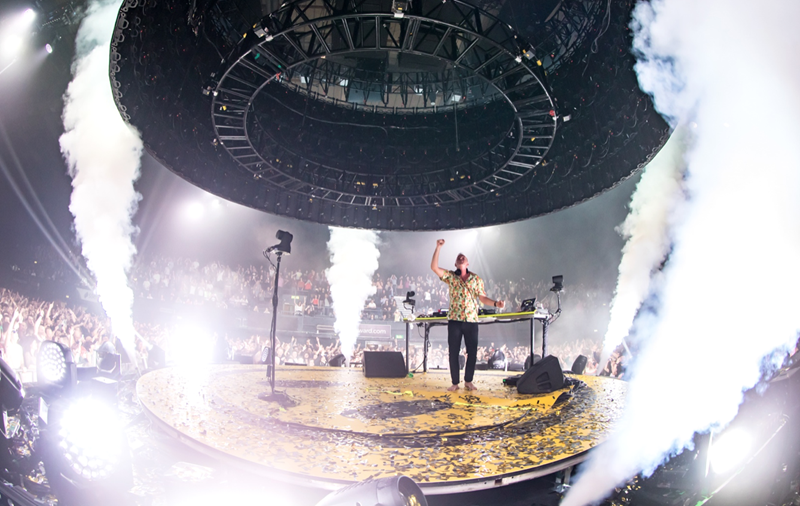 One of the highlights was the new & in demand, MoveCat motion control automation system, which had 12 active 500kg hoists - controlled on an Expert-T III. It was deployed on the 6x lighting fingers (2 motors per finger) which were designed to go around the audience. All of the MoveCat components were optimised for particularly quiet operations, which was essential since they were going around the audience, thus creating, a much more physical immersive experience, not done in a live arena setting before.

PRG is a leading international full-service provider of technical expertise and equipment for corporate and special events, music touring and festivals, theatre and the arts, exhibitions, brand activations, and film and television productions. To find out more about what we could do for your next event, get in touch at prg.com/uk.