PRG UK hosted another in-depth live talk for the ‘Hear Yourself Think’ talk series by welcoming one of London’s leading futurists; Amelia Kallman from Inition Ltd. As an innovation and technology communicator, Amelia has written and consulted on many occasions about the impact of new technologies and the implications upon business and the relationship between human interaction with AR, VR, and MR. She also regularly writes and consults on the emerging risks of the realities, where she has authored a cutting-edge report for Lloyd’s of London. Amelia also specialises in  the future of retail, AI & IoT. Not only this, but she has previously lectured at Cambridge University, written a multi-award winning book, and directed the first burlesque show in 360 film. She has continued to be an impressive influence within the digital and technology industries, where she continues to be featured in WIRED UK, IBC 365, and is the successful publisher of her own popular monthly innovation online newsletter; ‘The Big Reveal’, which commands an impressive readership. 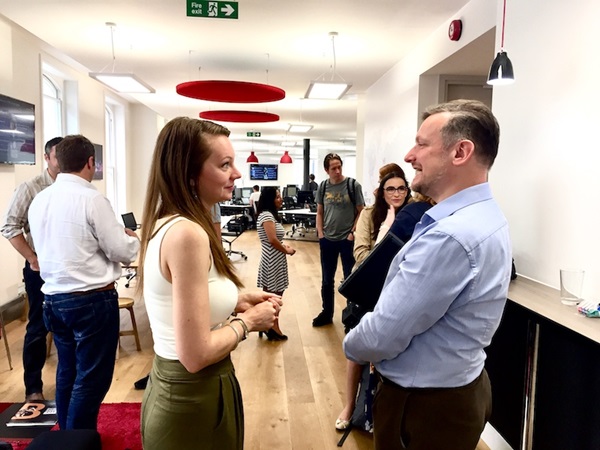 Technology, beyond the hype

Kallman opened the talk with her take on ‘Technology Beyond The Hype’, in which she outlined how 92% of companies today are unsure about surviving the digital age as advancements within  the technology industry or how to utilise the technology best, taking into consideration perceived best practices. This was particularly focused toward retail, finance tech, and live experiential entertainment as they all continue to move at an incredible pace, which will likely continue to  grow and adapt to customer/client demands and trends within the next coming years. 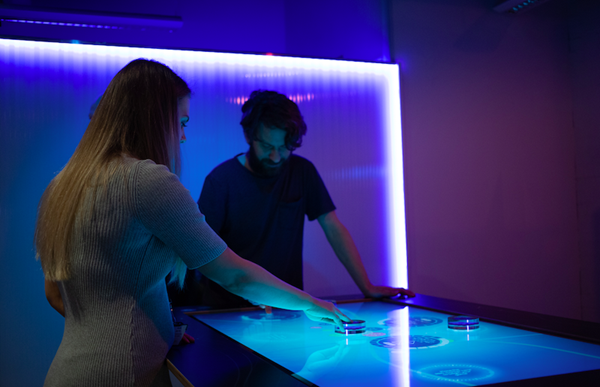 Disruption was a key subject that has been mentioned more frequently within society, and in the media, however, Amelia’s view was that innovation from disruption, presents opportunities and that the “digital, technological revolution” is rather just evolution. An example of this is the controversy surrounding 5G and how its frequency has been questionable and how it affects nature. Technology is still very much in its infancy and that being said is often still misunderstood, with its implications subjective to an individual. However, according to Kallman, 5G will become something that will lay the foundations as a platform for future tech to use, i.e. Blockchain, new realities, and even artificial intelligence. This would be used by potentially taking all data from the cloud, which would learn and adapt from the data being processed and as a result, would encourage- something which Amelia Kallman referred to as; “Machine Learning.”

An example given of this was Amelia AI - a customer service digital artificial intelligence, installed t a Swedish bank, which can handle up to 11,000 calls. She services 66% of all calls for the bank, with an 82% success rate. Her programming follows a human train of thought, where she can distinguish human emotion and adapt accordingly. The data she can process and collect, as well 𠊊s make sense of, allows her to know when customers are repeat calls and can process repeat customer service issues and follow up accordingly. This is where 5G could pave the way for such advanced A.I. to operate more fluidly and efficiently, within the digital sphere. However, this also raises another question, will people be willing to handle artificial intelligence and Machine Learning, and deal with it in everyday life, within human spaces and social environments? Will the 5G hold up to be able to support all of the data flow and will it be substantial enough to maintain all of the data streaming? 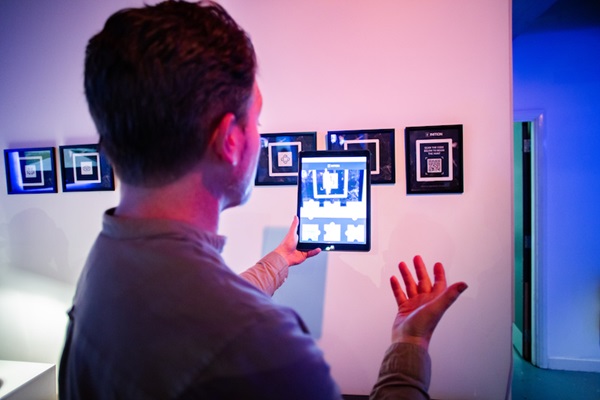 Risk, “weaponising” IOT’s and infiltrating data from points of entry

The second subject was looking at the risk of infiltrating technology from outside sources. Since using any technological device on any given data network, leaves vulnerability for the device to be hacked, as it produces an entry point. Companies still have not managed to completely overcome this issue, which has led to an oversight in introducing more technological advancements more quickly throughout the industry. Although enthusiasm has always been there, there was always that potential risk factor. With so many users connected using devices, it brings up factors of digital exposure to outsiders, who could gain very sensitive information on users. For businesses, whether it be technology developers, or those supplying the technology as a provider, it still presents an area of responsibility, and can potentially put those businesses at a disadvantaged position, if at any one point security issues are experienced – such as data infiltration, which could cause harm and damage reputations for businesses and cause clients to migrate to competitors or migrate entirely from a piece of technology, which could be a major source of revenue to organisations involved.

The third subject that was brought up was about how businesses were investing more in Augmented Realities and Mixed Realities to create a more inclusive experience using overlays,  to enhance experiential events. Amelia mentioned the following: AR is the overlaying of digital imaging and video. VR completely immerses you into a unique secluded world – a “Meta verse”. MR incorporates a 360o overlay into holographic experiences within reality – which is very much more inclusive. She mentioned how MR would most likely take more of a preference in the future, with companies such as Magic Leap being the market leader for Mixed Reality. Varjo, is another company that was mentioned, who focus more on photo stereoscopic (which uses photographs to recreate an image setting, allowing a user to walk through spaces –within the photograph). The world-renowned, groundbreaking audio technology company ‘BOSE’, are a prime example adopting this ideology into their AR sunglasses, which uses Audio and augmented reality to interact with GPS. It would know where a user was going and could place a user in an immersive experiential setting, to create a digital experience.

For example, a user could potentially be in the studio with Elvis, and experience a recording session, in an experience like no other, totally inclusive yet specifically tailored to a users location and preferred topic. What was essentially developed was a unique overlay - a digital layer into life, while a user could remain in a human-orientated environment. Another way, which brings a much more personal experience, is by Microsoft’s Holo Lens.

Haptics was another concept that Kallman discussed. This new type of technology incorporates touch and feels, enhancing the interactivity of digital content. This concept would allow a user to feel shapes and objects in mid-air. It is becoming more widely introduced to experiential marketing and live events. An example of this was through digital posters for the new Pikachu – The great detective movie, which included interactive digital posters, where users could touch Pikachu and actually “feel his fur”. In addition to this, regarding VR headsets, an extra mass is now being added to create more multi-sensory feelings. This is being used to collate bio data, which measures blood pressure and heart rate, crossing over to mixed reality. This could also be used to measure adrenaline levels. for example, riding a motorcycle on a motor track through VR using haptics to make a user feel they were actually on the bike, through the feeling of the rubber overlay on the handlebars, giving a closer experience to the real thing.

With the use of VR, particularly ones that are using multi-sensors, create images, which is generated through measured brainwaves, to provide a much more personalised and individual experience for the user. The only risk from this type of immersive technology is that it could create a sense of gaming transfer phenomenon. This is basically where an individual would begin to hear and see the things they see in VR but within reality. Because the engagement with the brain is so intense, it could potentially rewire the brain and an individual’s dislocation with reality itself. 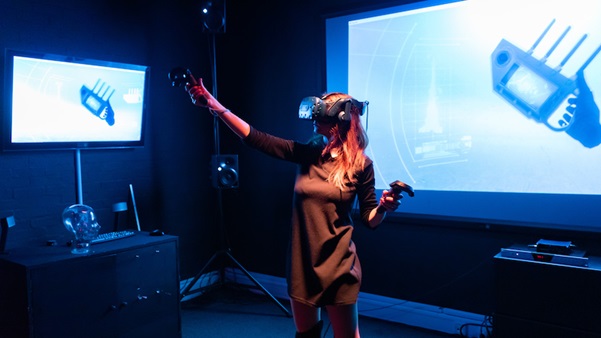 This new type of product would also allow the creation of imagery and visualisation through VR, and apply that to Mixed Reality within the real world. This crossover technology could then take the data from the digital world and then allow a user to potentially print a 3D physical model. (Think about the technology used by Tony Stark in the movie Iron Man, which allowed the digital imagery to be created and then the physical suit created from the digital blueprint holographic scans). However, the only potential disadvantage of this in its current state is that there could be an in-accuracy from the digital modelling to reality – i.e. architecture and manufacturing industries could be impacted by the inaccuracies. Over time, this would improve as the technology both hardware and software, and digital mapping of 3D imagery develops. 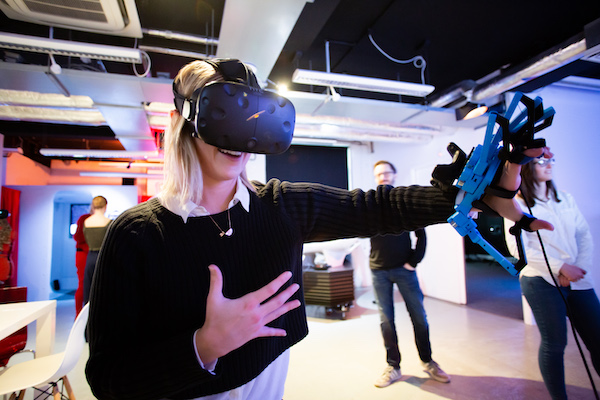 In conclusion, all of the above technology is inclusive and for sure is becoming integrated into our working lives, both as an aid for industry, but also as a form of entertainment and adding an extra layer to the live events industry, which only enhances the overall experience.

Experience is something that people are more willing to pay for, and it is something in which companies can truly benefit from to use to their advantage for profitable gains. Kallman stated; “even if a piece of technology sound disruptive, it doesn’t have to be”, which is true if all of the positive opportunities are recognised for these technologies. There will always be risks involved in using any new technology or device, which creates a fully immersive digital experience, however, the opportunities for financial gain, far outweigh these risks. In the future it will be second nature to use VR, AR and MR within experiential events and the scale of these technologies being adopted will only increase at a faster rate.

#SeeWhatWeCanDoTogether PRG is a leading international full-service provider of technical expertise and equipment for corporate and special events, music touring and festivals, theatre and the arts, exhibitions, brand activations, and film and television productions. To find out more about what we could do for your next event, get in touch at prg.com/uk.