PRG Puts 360° Services Into Play for the Big Game

For more than 20 years, PRG has provided equipment and solutions for the biggest annual event in US sports and the cultural touchpoint that is the Pepsi Halftime Show. This year, the company contributed lighting, rigging, LED, video, networking, camera, projection, broadcast equipment, truss and gear rental to 2021’s big game.

While the current state of the world meant that fewer brands and businesses were activating technology at pop-up events, parties and remote viewing areas, some truly exciting and innovative surprises were still in store, and we were thrilled to help bring them to life.

Below are a few highlights of PRG’s participation:

If you’ve watched the Rams at home in Los Angeles this season, you’ve probably seen the highly produced 3D set pieces that are featured during the player introductions, as the players run through the tunnel out onto the field. LA-based creative team Production Club designed both the custom light show and display seen all season, as well as the segment featured in coverage prior to Sunday’s game. PRG provided lighting, video and rigging by way of Production Director, Eric Ginnetty. 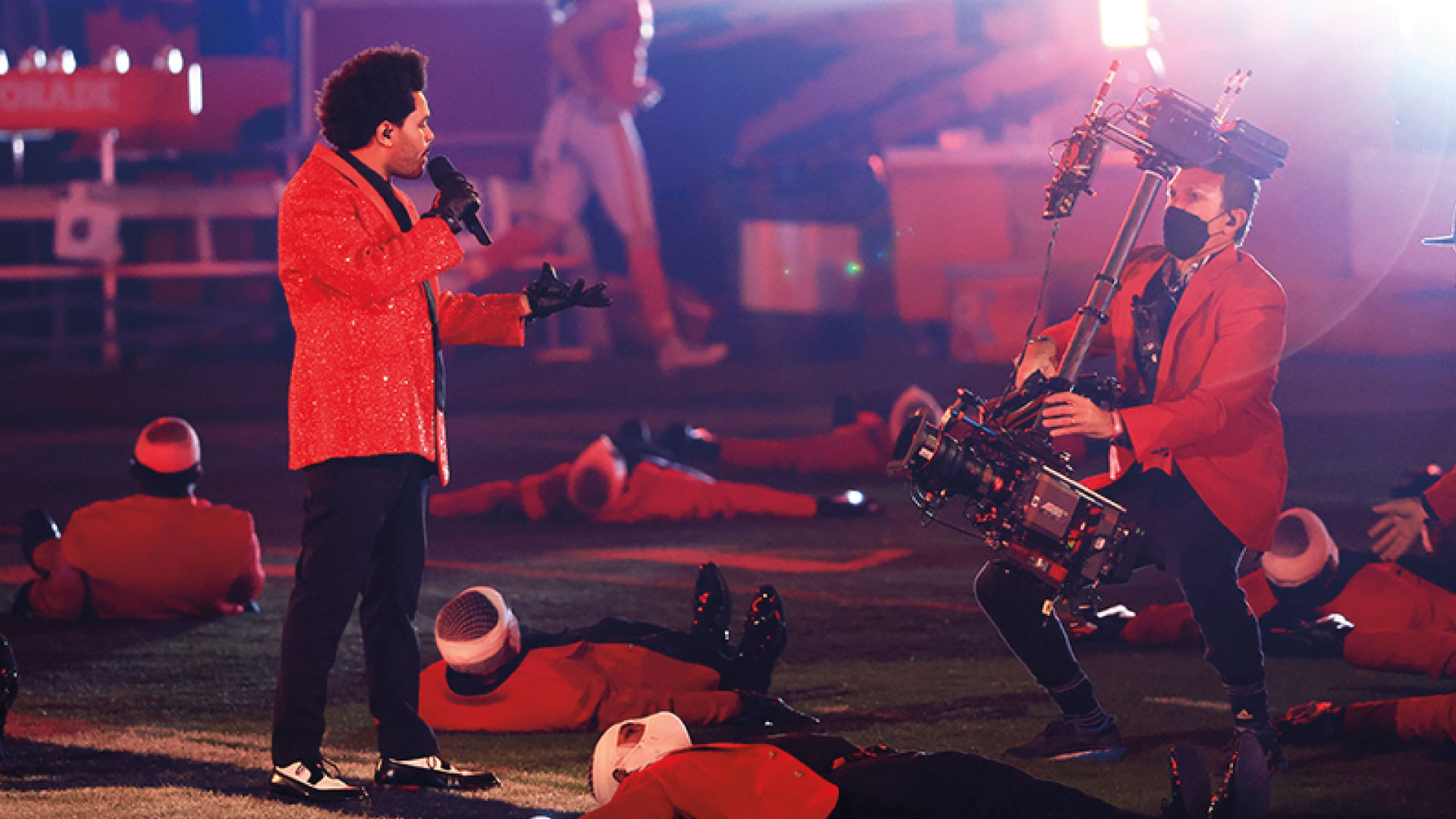 Did you notice the film-quality look that the Weeknd’s halftime performance brought? You can thank director Hamish Hamilton of Done and Dusted and show producers Roc Nation for that. As a director for both the Oscar and Emmy award shows, Hamilton wanted to bring a similar cinematic feel to this year’s Pepsi Halftime Show. PRG had the chance to deliver with its 35LIVE!® multicamera system.

The 35LIVE!® workflow replaces traditional multi-camera approaches with digital 35mm cinema cameras and lenses that can be broadcast live or pre-recorded. Because the halftime show was live, a long-distance fiber system was used to accommodate the large scale of production.

Turning pandemic restrictions into unique design choices was a theme of the day. The Weeknd took advantage of the intentionally sparsely seated stadium — which was filled to one-third its normal capacity due to COVID-19 concerns — and awed audiences with an extremely mobile performance in which he made use of the entire structure. The most viral moment of the performance took place in a lit maze with close-up camera work courtesy of one of the ARRI AMIRA cameras outfitted with a Zeiss 8mm Rectilinear wide angle lens. Once the singer made it down to the football field, trippy vertical color bleed effects were achieved by using streak filters to shoot the masked dancers’ LED accessories. 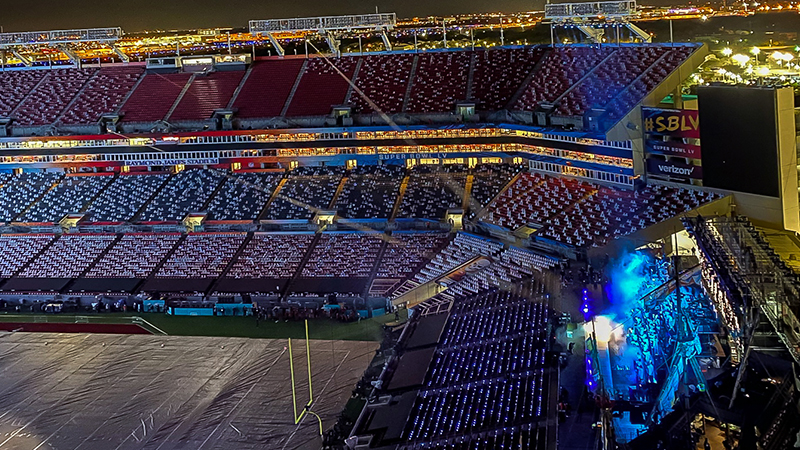 PRG additionally provided lighting for the design by Al Gurdon. The rental order was comprised of more than 700 lighting fixtures, among them 8 proprietary PRG GroundControl Longthrow™ units, an advanced automated followspot which was perfect for the big game as they were designed specifically for long throw applications where high output is critical; also 2 GroundControl Best Boy® Luminaires; 140 Icon® Edges; and 64 Best Boy Spots.

“This year, PRG was able to provide cinema-style cameras for the first time in Super Bowl history,” said PRG SVP of Television, Film & Broadcast, Andrea Berry. “We’ve been a long-term lighting provider for the event but now we can add camera and broadcast technology to that as well.” 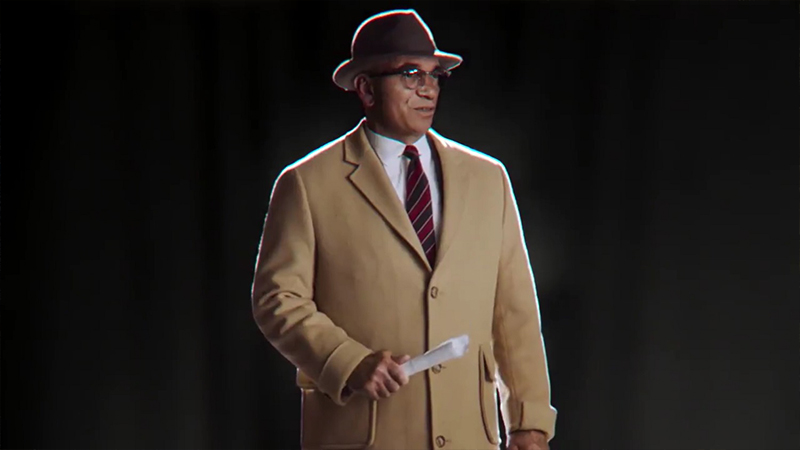 A hologram of the late, legendary football coach Vince Lombardi wowed audiences with an inspirational message. In the PSA, sports metaphors were used to illustrate that it isn’t about getting knocked down, but about getting back up again and facing adversity. Twelve tiles of ROE Black Marble 4mm LED floor were used to project onto a special transparent screen by VNTANA to bring Lombardi back to life, not only on television screens, but also at the stadium for live audiences. This creative, technically challenging concept was produced by experiential agency 72 and Sunny; visual effects and content by Digital Domain; and technical solutions and equipment including LED and technicians by PRG. 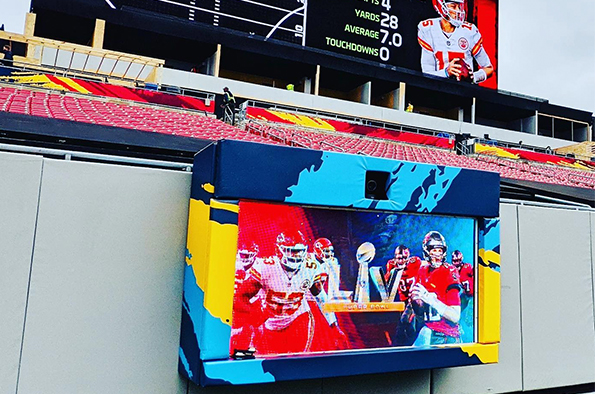