How Jack Harlow’s creative team and touring crew brought the “COME HOME, THE KIDS MISS YOU” tour to North America and Europe.

After dropping out of college to start his touring management and production company, Chadrick Fellers' grandmother told him he was "wasting his potential" so naturally, he named his company after the epic diss. In handling the logistical, design, and programming aspects of touring, Fellers had found his calling and success. His company, WastedPotential, has grown steadily and boasts an impressive roster of musical clients including Rod Wave, Future, Lil Baby, A$AP Rocky, Russ, Blxst, Fletcher, AJR, Bazzi and most recently, Jack Harlow.

Harlow’s career, cosigned by Drake, has similarly grown exponentially in the past two years. In touring, this sort of rapid success can create scalability challenges. The sold-out US leg of Harlow’s fall 2022 tour, “Come Home The Kids Miss You”, switched between 5,000 cap venues like Boston’s MGM Music Hall at Fenway and Atlanta’s State Farm Arena with a 21,000 cap. To combat this Fellers worked with Harlow’s Production Manager, Anthony Cotton, to compile all the stage dimensions and tech specs. The next step was designing an A and a B rig for the various venue sizes to ensure that all fans would get the same experience, meaning that all essential stage elements needed to fit into the smaller venues, with enough supplemental gear available to fill up the stages at the larger arenas.

“It’s much harder to do this type of run where it’s a hybrid between large theaters and arenas than it is to do a full arena run,” explained Fellers. “We have crucial elements in the show that we cannot kill, so it makes it incredibly important to plan ahead.”

In the early stages of tour planning, Fellers worked as the Creative Director: framing the show narrative, designing the set, and writing and directing the video segments that play as content during the show. Once the show was on the road, he acted as touring LD, calling spots, going over special effects, and working one on one with Harlow to perfect the show each night.

Fellers surrounds himself with a team of talented crew members, able to fill multiple roles on tour.

In addition to being the tour Production Manager, Cotton also oversaw the audio on the tour. WastedPotential additionally had many other members of the company on tour doing monitors, building the garage set, and helping the lighting techs.

“We come at it from a bunch of different angles, not just the creative side, but also some of the execution on the road, which is important for us,” explained Cotton.

The tour continued with the same vendors to carry over from the North American dates into Europe, with PRG providing video gear including LED, media serves, cameras and projection, and Christie Lights handling the lighting.

Prior to heading out on the road, tech rehearsals were held at PRG’s new Nashville facility, Starwood Rehearsals. During this two-week stint, they built out the show and Fellers was able to identify the automation moments.

“Being in the Starwood gave us the time that we needed before we went into the actual production rehearsals to make those decisions and then be able to render content, change some of the lighting, and change some things about the fabrication,” said Fellers

Starwood Rehearsals is located alongside PRG’s Nashville depot, with immediate access to every type of production equipment needed.

“Being so close to all the gear was important. We got rid of some video tiles because when we started doing the automation, the walls were snagging into the house or the garage. It was nice to be on site with the vendor so we could make those calls in real time we were able to work more efficiently.” 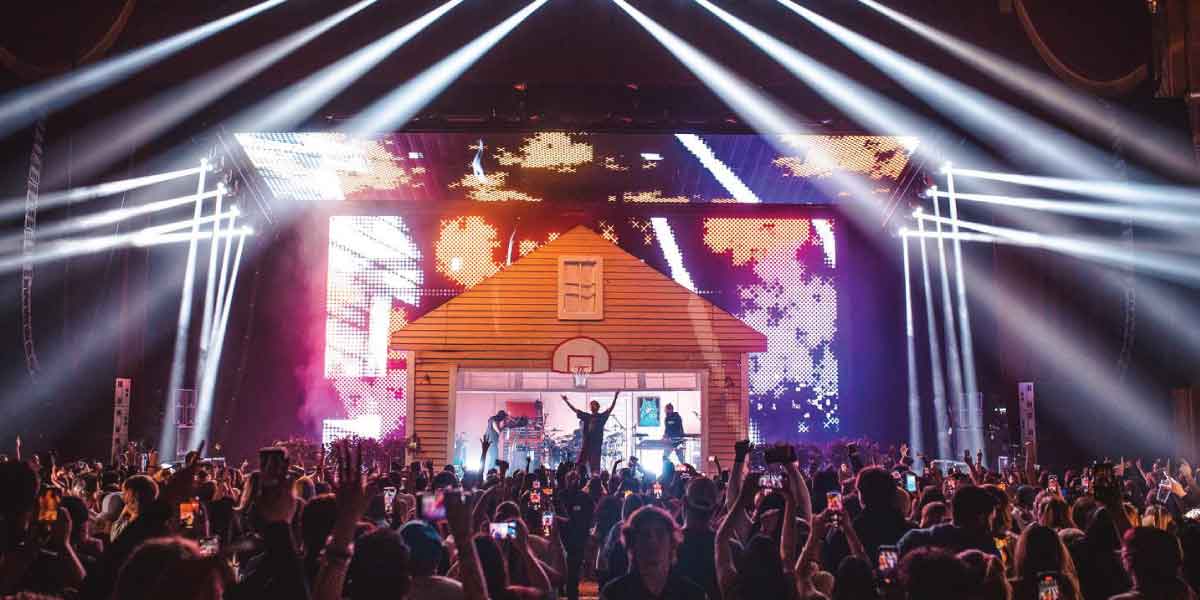 The lighting order featured 84 fixtures, all spec’d with weight restrictions in mind. To plan for scalability in the lighting rig, the team averaged out the size of all the venues to see how large the average show could be. Then, they focused on smaller venues to see how they could scale down but retain the show.

“Scaling down the design can be challenging, but if you design the rig into sections, it becomes adaptable to most venues,” explained Lighting Designer and Programmer Zachary Berget. “For programming, we needed to keep in mind that we may lose some fixtures and to program with full intent that the show won't lose much of anything if they go away.”

Berget’s favorite fixtures on the tour are the BMFL WashBeams used on the ground, due to the punch, quality color mixing, and the flexibility they allow on the road.

“JDCs were important to having the garage and then having some of those, the X4 bars upstage is really important to be behind the garage peak so you can put light behind it, which looks really good,” said Fellers. 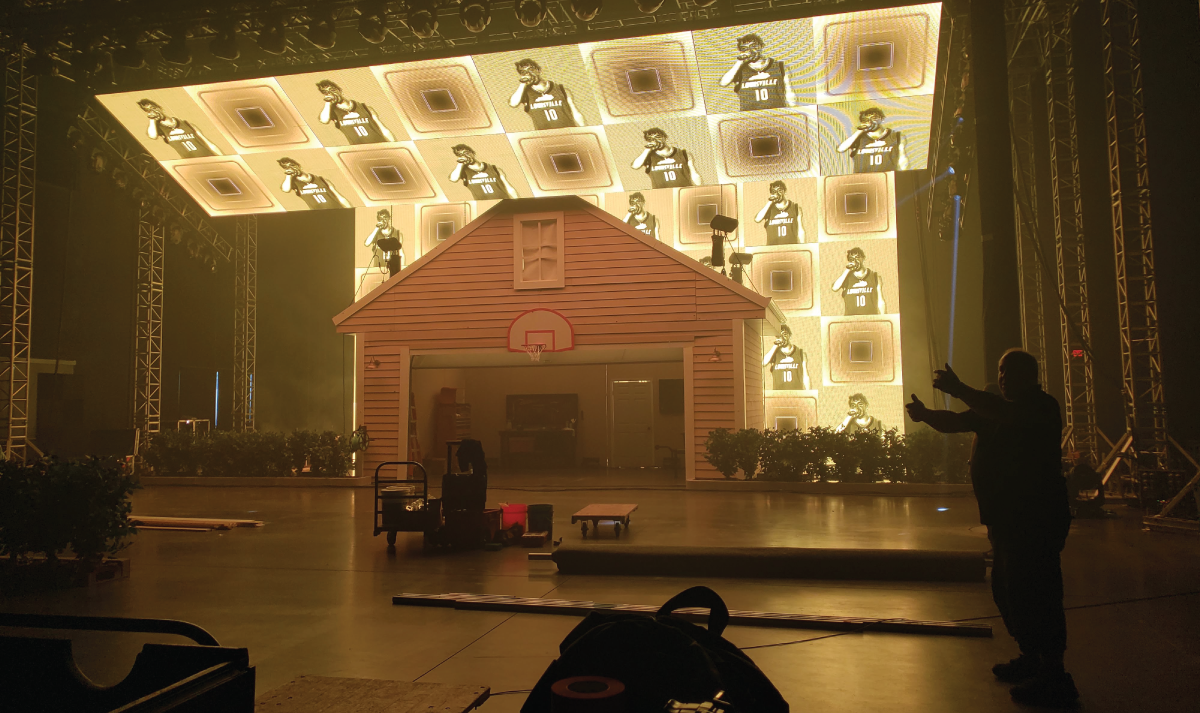 The show played out like a classic rap show for the first act, with Harlow as the singular performer. Video skits, created by the WastedPotential team, moved the plot along, threading the Midwest homecoming narrative and leading to the big reveal: an automated 20 ft LED wall that was previously acting as a backdrop pulled up like a garage door, revealing a full band. It felt like band practice, with NBA posters and jerseys adorning the walls of the garage set.

“Knowing that we had a band coming was a big part of the design process, because Jack has never toured with a band before,” explained Fellers. “He wanted to introduce it in a really unique way and integrate them aesthetically, so putting them inside of a garage worked perfectly.”

Integral to the plot and the aesthetic, video components drive the show forward. The LED garage door, which is made to be as light and strong as possible with PRG’s proprietary SpaceFrame®, acts as a canvas in its upright, revealed position. At certain moments in the show, projectors mapped visuals onto the garage. At other points, lighting was used with gobos and prisms to create a trippy, layered effect.

The skits were filmed in Harlow’s hometown of Louisville, KY, and have a cinematic feeling. The first features Harlow driving in the desert in an old hatchback with a bunch of suitcases and equipment. He drives past a sign that says, ‘Come Home the Kids Miss You’.

The show featured three cameras: one FOH long lens, and two handhelds in the pit, operated by Cole Peterson and Dana Jenkins.

“Jack Harlow has a really strong fan base who know all the lyrics to his songs and always have creative signs, so finding enthusiastic and strong crowd shots is fairly easy,” explained Video Director Marie-Frederique Opsomer.

Because the IMAG screens couldn’t fit into smaller venues, Opsomer adapted the show by adding the camera feed to the screens for more songs and using the ceiling wall as an IMAG for select sequences where Jack interacts with the crowd and props including a basketball hoop and a working garden hose that he playfully sprays the audience with.

All Notch effects were made by Engineer Collin Wilkey. He worked on the effects daily to get them in line with the creative team’s vision. The effects were used on the camera feed that was displayed on the screen, as well as on the IMAGs.

“Colin is very talented and passionate about Notch and d3 and that was clearly visible in his work,” said Opsomer.

During production rehearsals, Jack introduced himself personally to every crew member, fostering a feeling of closeness within the touring team.

“It is very rare for an artist to do that, and it was much appreciated by everyone. It made it easier to feel comfortable and go to higher ups with questions or concerns,” said Opsomer.

The benefits of working with the same team consistently was mentioned by both Fellers and Brooke Hershey, PRG Account Executive who has worked with WastedPotential for years.

“It’s already a dream to work in this industry but doing it with an artist and group of people who are this authentic takes it to the next level,” Hershey said. “With all the long days and nights, feeling at home on the road makes all the difference.” 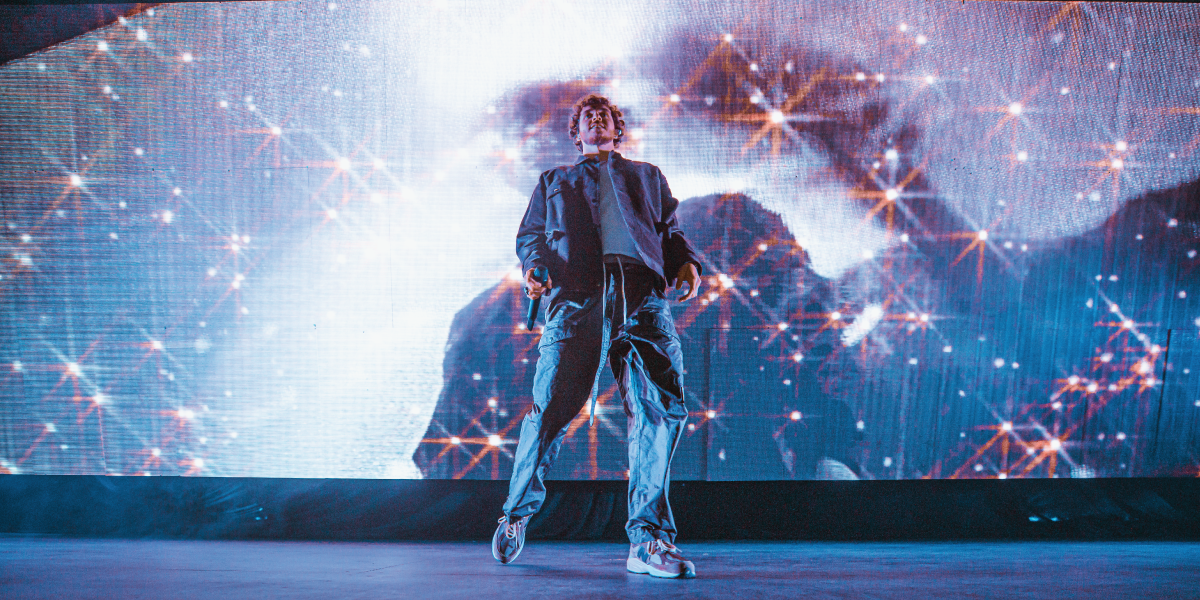