After more than a full year since 2020’s virtual event, the NFL Draft was back for 2021 with a live audience at First Energy Stadium in Cleveland, Ohio. This was one of the most complex events pulled off since the pandemic, with PRG providing rigging, LED, video, lighting, and broadcast services. With a full production team and crew onsite, the event marked a return to in-person events.

Throughout the three-day event, NFL Media leveraged the knowledge developed for the 2020 Virtual Draft. PRG worked with Van Wagner Sports & Entertainment to assemble the workflows needed to connect everyone. This year, a hybrid approach was deployed that combined an onsite show with more than 20 LED displays in Downtown Cleveland and an array of live feeds for individuals who participated remotely.

PRG worked with Van Wagner to provide all of the gear for the master control room and the Evertz System Core.

PRG provided lighting for the design by Jon Kusner of 22 Degrees, with lighting direction by Madigan Stehly and Ted Wells.

The NFL wanted to celebrate Cleveland’s Rock-n-Roll Hall of Fame, so Scenic Designer Kris Bast was tasked to design a motif for the show that reflected the city’s rich music history.

“The VL-5 reinvented the basic lighting tool that was the foundation of rock n roll, the Par Can,” explains Kusner, who incorporated over 400 of the Classic Series 300 VL5 fixtures into his design for the draft. “We went with a design that ended up being one of largest displays of the 30-year-old lights seen in many years.”

The lighting order included more than 1,500 fixtures, all run on a grand MA2 by programmer Brian Jenkins. Tony Ward was both the gaffer and PRG’s Account Executive for the show.

The event relied on an extensive use of PRG's GroundControl™ Followspot System, with 14 Bad Boy and 6 Best Boy spots in play for a total of 20 units. This had a significant footprint to properly socially distance for the operation.

PRG managed rigging for the entire show including audio, lighting, LED, scenic and cameras. This included 262 motors, and over 125 tons of gear in the air. Kinesys automation was used for the fly-in interview screens, which made up a significant portion of the reporting for the hybrid event.

Over the two and a half weeks onsite, the crew experienced all four seasons of weather, ranging from 85 °F to snow and 35 mph winds. On the technical side, the show was produced by 105 individuals working in 14 trailers located behind the main stage. Below is a crew list from the departments PRG worked on. 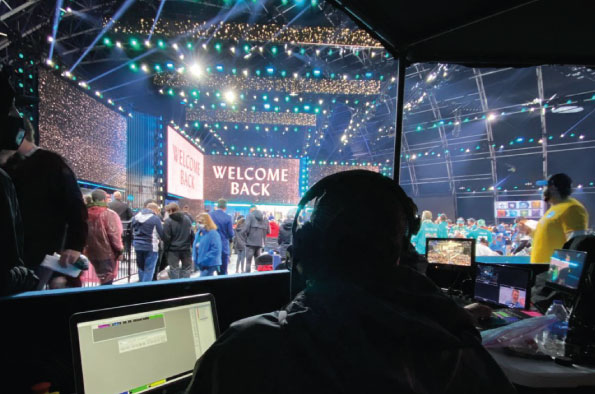