Following an off-Broadway run at Playwrights Horizons (NYC) and a pre-Broadway run at Woolly Mammoth Theatre (D.C.), A Strange Loop has hit Broadway. With book, music and lyrics by Michael R. Jackson, the musical, which markets itself as a “big, Black, queer ass American musical” opened at the Lyceum Theater on April 26 to overwhelmingly positive reviews. A Strange Loop follows a young, queer aspiring playwright (Usher) at war with a host of demons — represented as Thoughts in his head — attempting to understand his own strange loop.

This culturally ground-breaking show won the 2020 Pulitzer Prize for Drama (one of only 10 musicals to have ever received the honor), along with the Lortel, Drama Desk, Critic’s Circle and Drama League Awards for best musical. It has also been nominated for 11 Tony Awards, more than any other show this season.

The stage was brought to life by a Tony-nominated creative team: scenic designer Arnulfo Maldonado, lighting designer Jen Schriever, and sound designer Drew Levy. Their greatest creative challenge: how to manifest the constant flow of Thoughts in Usher’s head on stage.

“The musical is so conceptual – it is in his brain – we really spent time determining how to conjure that in real life. Six ensemble members play “Thoughts,” and each have their moments but many times they intermix, so the framework for that is really important,” said Maldonado. “It needed to be something specific but that could also disappear.”

Maldonado took cues from the rectangular performative windows of Amsterdam’s red-light district as well as New York’s scaffolding and florescent lighting to conceive a brick wall unit with six doorways in which Usher’s six Thoughts would be positioned.

PRG built the entire stage deck, which has a reflective black surface, along with two scenic lifts and the 30-foot-wide by 10-foot-tall brick wall unit that provides the backdrop for the show. The wall moves up and down stage, depending on where a scene is played. Although it moves as one piece, it also splits open into two sections that rotate 90-degrees, becoming perpendicular to the audience to reveal action upstage. PRG’s Stage Command System® is used to control all the automation.

“Automation makes the wall unit movement fluid and seamless as if it is more like an additional Thought – in conversation with Usher and the Thoughts,” stated Maldonado.

The set also has a significant amount of electric built in. One complex feature is the crisp, lighted outline around the unit’s doorways that house the six Thoughts. To create this look, PRG used different types of LED lights that sit in a channel with a diffuser on top to create a neon look.

“Perfect corners make perfect rectangles; sometimes the simplest thing is the hardest thing to pull off and they look incredible,” said Schriever. “We can control the gradient and movement of the doorway lights. It is a major part of the design and so much more elevated and beautiful in this production. I am so happy we were able to fully realize the idea.” 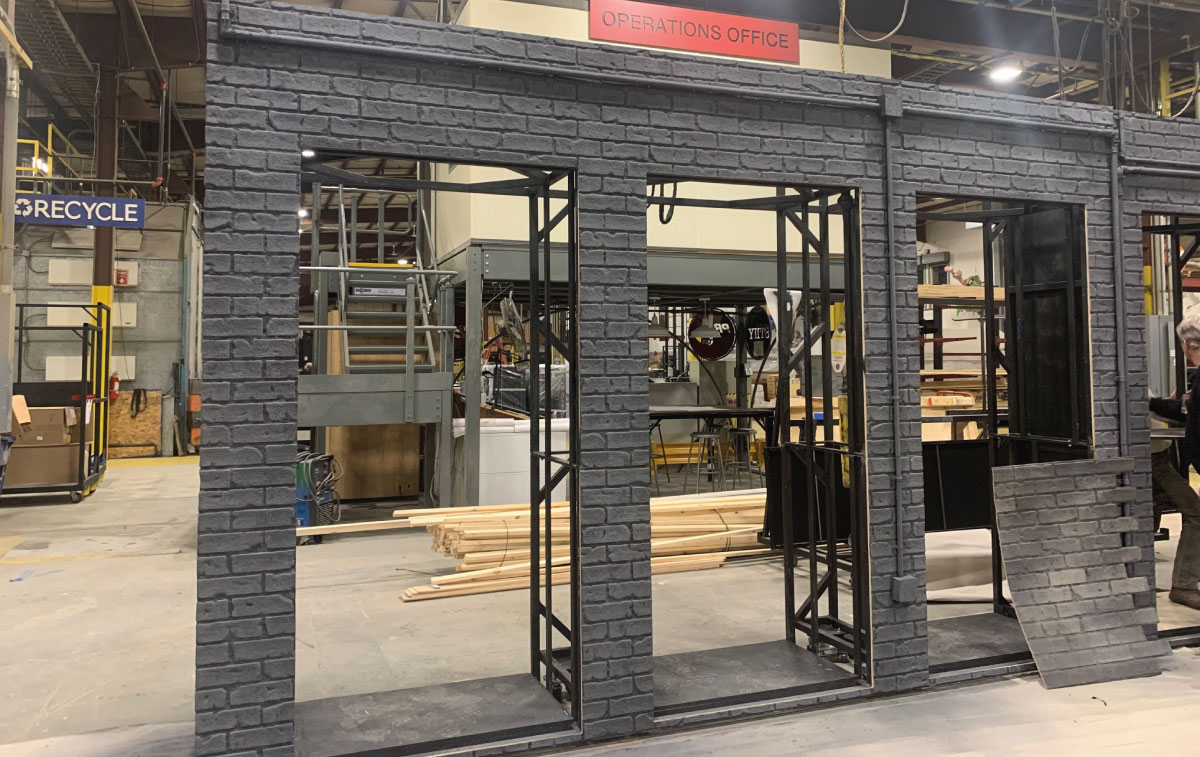 When a doorway lights up, it represents the activation of the voice or Thought in Usher’s head and the lights are reflected on the super high-gloss black floor, creating a simple and visually beautiful effect.

“The lighting has to nimbly transform as Usher confronts his six Thoughts as they emerge from the darkness and retreat - so the lighting is playing along with that head space,” said Schriever.

As Usher’s journey progresses, the wall opens, creating a very intentional black void. “The void is expansive. In this moment, Usher can choose to stay in the void or to push further into the discomfort and the lighting represents the discomfort,” said Schriever. “I am so lucky PRG had the GLP impression X4 Bar for a narrow, bright stream of light that provides endless depth behind actors. It is how I always wanted it.”

Even though A Strange Loop is a minimalist show, Schriever feels that she was able to fully design each moment to feel full and complete in a way she hasn’t been able to do before.

“There was never a time I felt I couldn’t beautifully reveal the actors, never a time where I felt they were underlit or too dark and this is a dark show,” said Schriever. “I am always playing on that edge of living in the subliminal space or popping actors into a bright show-stopping number and then popping them back in the dark subliminal space.”

Schriever employs 90 MAC Auras as the work horses on the show positioned on the side, overhead and out front. The theater’s tight spaces and a low show portal created challenges for positioning followspots to have a clear shot to the stage, so it was the perfect opportunity to deploy PRG GroundControl® Followspot System  (a moving light with a camera attached that allows the operator to control it from a remote location via a monitor and a controller).

PRG’s GroundControl Followspot System is used with Best Boys® and, for the first time, with Robe Robin T1 Profiles. For the balcony rail where weight is an issue, PRG converted four Robe T1s to work in GroundControl. The others, which are on positions over the stage, Best Boys® are used. Another first for PRG and for Schriever is the use of the new ETC Source Four LED Series 3 - one of the first uses of the Series 3 on Broadway

“I have the Series 3s on the farthest away position and they are bright and beautiful,” said Schriever. “All the gear is amazing. We used everything we asked for and it is all in the right place. It was a shockingly relaxed process with very minimal adjustments or asks.”

When it came to designing the audio system for Broadway, Drew Levy knew he wanted to approach it differently than in previous iterations: more impactful with the music, without getting in the way of the words.

“It is a Pulitzer Prize winner so words are obviously supremely important, but I also wanted to feature the music and the orchestrations,” said Levy.

To do that, he employed the d&b Soundscape, which allows for spatial audio and object-based mixing. Soundscape helps localize actors’ voices. It uses the natural way hearing works to localize sound and space to know who is speaking, allowing audience members to identify each character more easily.

“We can spread voices out in space rather than just a traditional stereo with level panning,” said Levy. “Every instrument occupies a space; we’ve designed our system so the band feels huge at times but there is still room in there for vocals to live in multi layers. Usher on top, another character he is interacting with singing under that and then the Thoughts as the supporting chorus.”

Additionally, the team used a TiMax Tracking System to position actors in space. An antenna array mounted above the stage receives signals transmitted by small radio tags worn by the actors, so the system is constantly updating their physical position in real time. This is a novel approach and the team had to determine how to bring the disparate technologies together. Crucial in setting it all up was d&b ArrayCalc, the prediction software. Further, an Avid S6L console, which is flexible and can use processing tech to enhance multiple aspects of the show, made programming fast.

“PRG bent over backwards to support the show when it was at Woolly. When we found out we were moving to Broadway, I was on the phone with PRG quite a bit trying to figure out if we can do this thing that I wanted to do. They were really supportive and helpful in getting us the stuff we needed and in a timely fashion which is not easy right now, and make it fit within budget,” said Levy. “The system does exactly what I hoped it would do.”

PRG’s VP and General Manager for Broadway, Alex Donnelly said, “When we first got involved with A Strange Loop in the spring of 2019 at Playwrights Horizons, we were really rooting for the show go all the way. Its message is so powerful and audiences really respond to it. We’re proud to use our technology and production expertise to help a unique project like this one, with such an innovative creative team, on its journey to Broadway.” 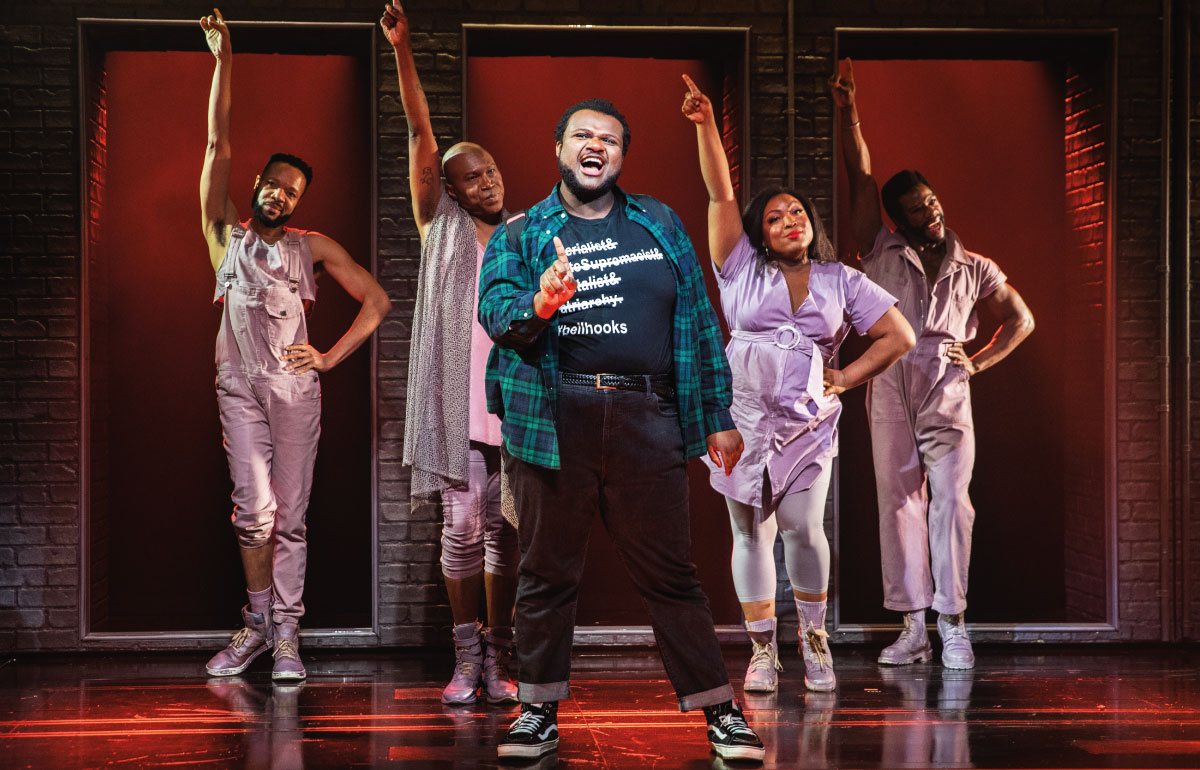