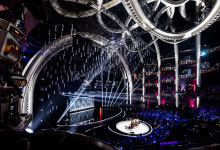 Since its creation in 2006, many different skills have been showcased on NBC’s “America’s Got Talent.” While the majority of winners have been singers and musicians - acrobats, ventriloquists, mentalists, magicians, choirs, comedians, dancers, and countless other acts have also graced the AGT stage which has called Hollywood’s iconic Dolby Theatre home for the last three seasons, each supported by a specialized creative team. The variety of acts sets AGT apart from many other televised talent competitions, while also presenting rigorous production challenges.

Theatrical lighting plays a pivotal role in telling the story of each act and keeping the excitement high on AGT. Lighting designer Noah Mitz, member of the Full Flood creative team, is responsible for this task. With a background in theater design and a degree from Carnegie Mellon University, he found his way into the TV world as an intern for Bob Dickinson, one of the industry’s most celebrated lighting designers. “I found the work in TV to be attractive because it is so fast-paced and has technical challenges that can be rewarding to solve,” says Mitz. “And almost everything we do by reputation is still theatrical.” 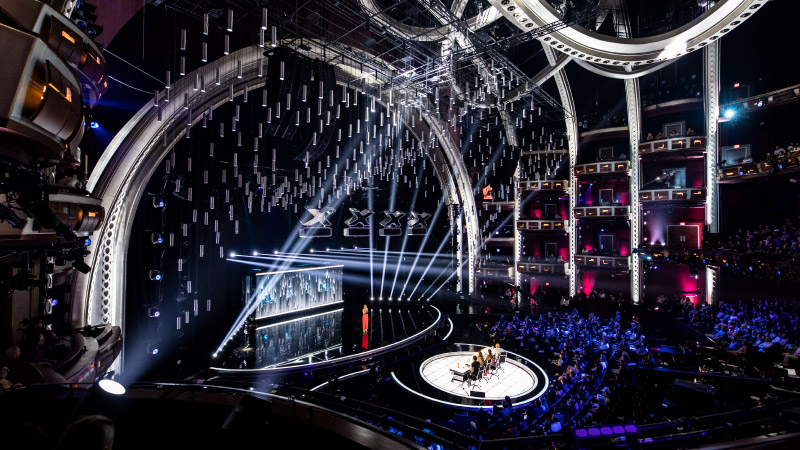 Mitz’ resume includes lighting design credits for many award shows including the Golden Globes, MTV Movie Awards, BET Awards, and the Grammy Awards. He also worked as the lighting designer for CONAN from 2010 to 2014 and has been with AGT for four seasons.

The production value of this summer’s most popular television show is astounding. “Once we get into the live shows, it’s like producing an award show every week for six weeks,” explains Mitz. “We have six weeks of builds, fixture adds, ordering things, and we do a lot of custom LED tape projects, lots of little parts.”

All that attention to detail hasn’t gone unnoticed - on October 21, Mitz was awarded the inaugural “Knights of Illumination USA” award for AGT Season 12 in the Live for Broadcast, unscripted category. KOI is a showcase of entertainment lighting and video design, judged by three panels of industry experts in conjunction with the ALD and STLD organizations. 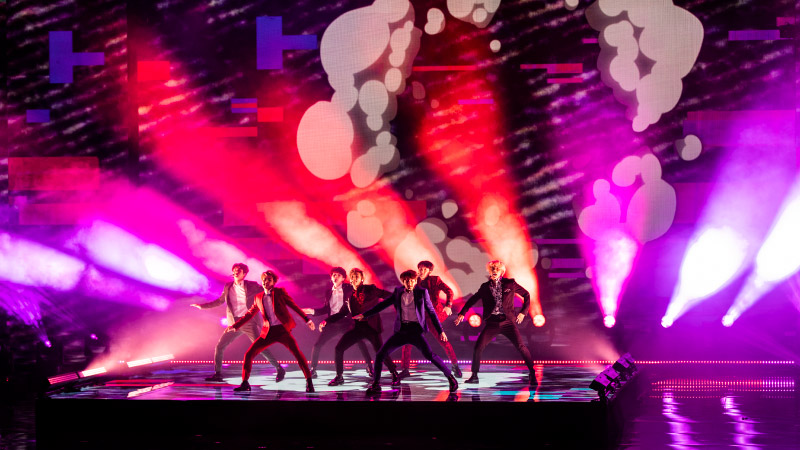 Just under 13 million people watched the final two episodes of the 13th season of the NBC competition, where former concert pianist turned magician Shin Lim took the top prize. Lim performed his stunning close-up magic tricks that demonstrate an absolute mastery and reimagining of sleight of hand techniques on a dark forest set, where he walked amongst a foggy floor bathed in blue light.

During that same episode, nine other acts competed, each with a completely unique lighting and set design. “There’s a creative production department that comes up with ideas for screens content, special effects, wardrobe, vocal performance and song choice,” says Mitz. “That team consults with the acts and then comes to us to present the overall concept and work on a lighting approach for each performance.” 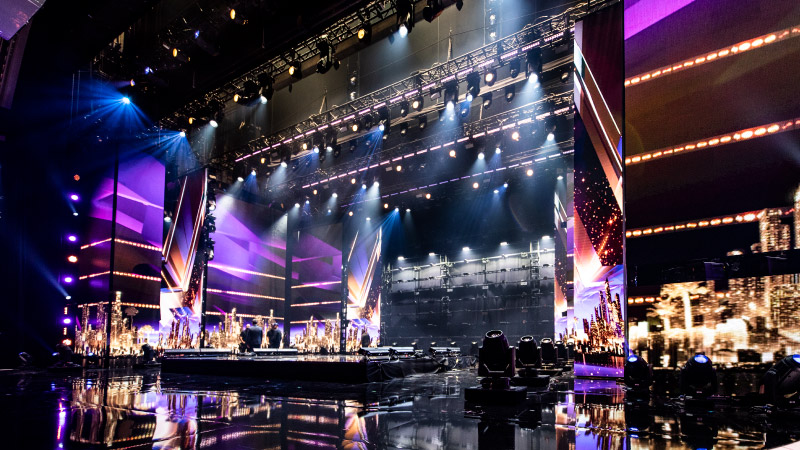 Mitz and his team enjoy the challenge and the excitement of working with so many different types of acts and lighting looks. “This season we had a 160-person choir, a 30-person dance troupe, acrobats, singers, everything. The variety is nice for us because somewhere in there we will get a stand-up comedian and maybe get to take a breather.”

In an interview for Carnegie Mellon University’s website, AGT Executive Producers Jason Raff and Sam Donnelly explained to reporters that Mitz’ lighting design work is essential to the overall visual success of their show.

"Week after week Noah and his team make an instrumental creative contribution to the show - combining their artistic vision with their technical knowhow," Raff said.

"It's about communicating the proper mood and feeling to the viewer,” Donnelly added. “Our phenomenal lighting team grasps more than just the basic lighting tricks, illusions or techniques; they have an artist's eye for color, shadow, light, depth and have sincerely mastered the practices for replicating such artistry." 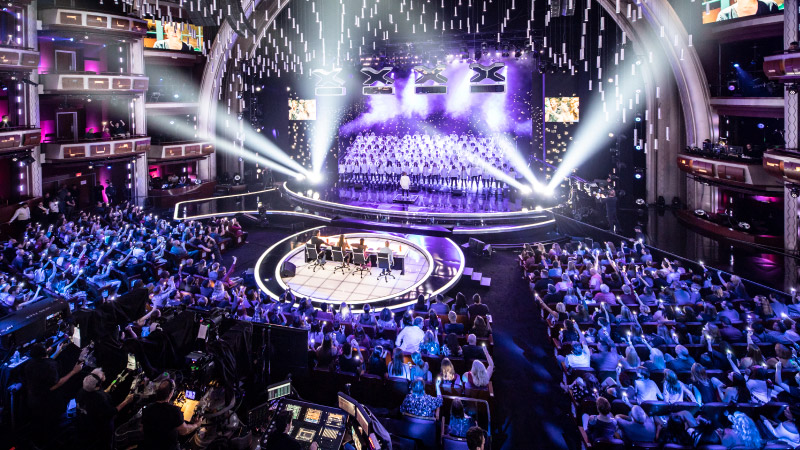 Watching the performers on their journey is one of the most rewarding aspects of working on the show for Mitz. “We start working with them in March during their first auditions for the judges, and really get to see them develop through the various phases of the show,” he says. “Part of the challenge is that you don’t know who is going forward because America is voting during the live rounds.”

This means Mitz and his crew sometimes have as few as five days between results shows and the following live show to get everything together during those intense weeks. “We will call Travis Snyder at PRG and tell him we think we need one set of fixtures for an upcoming performance, but then when the voting comes in, a different act will move forward,” explains Mitz.

Mitz says that these kinds of surprises happen all the time and in combination with guest performances on the live Results Shows, this means lots of last-minute change orders and a need for 24/7 support. “Travis and Tony Ward are in daily communication with us even on the weekends. We are constantly changing things and it’s always handled really well. Travis will find gear across the country for us, and if we need it, do last minute custom orders,” explains Mitz. “The show is very well supported.” 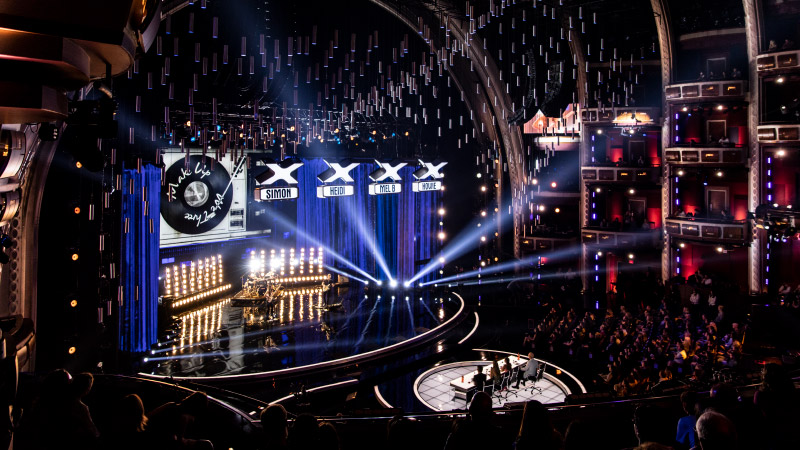